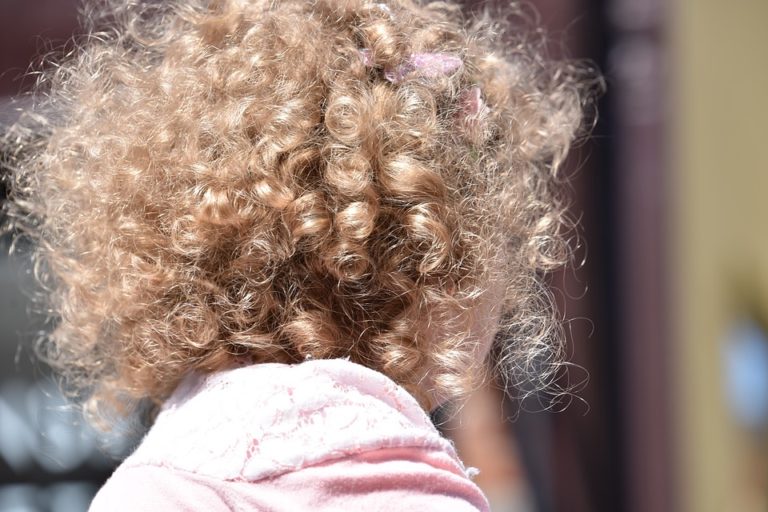 It all started innocently enough. Pretty much since the day she sprouted them, people have been commenting on my daughter’s beautiful, curly blonde hair. “She’s so cute, where did she get her curls from, how often do you cut her hair?”

The comments occur so frequently that I’ve grown accustom to it, and initially I enjoyed it. I love my daughter’s hair and am glad other people can also appreciate her unruly look (permanent bedhead, anyone?). But over the past several months, as she is socializing more and interacting with older kids, I’ve noticed both kids and adults touching her hair.

I thought little of this until the other day at the playground when I saw a random boy come up to her and- without asking- pull on her curls repeatedly and even make sound effects, “Boing, boing, boing,” seemingly oblivious to her disapproval.

As I watched my daughter from afar, I saw her face transform: slightly tearful, a scrunched up nose, sad yet angry eyes, confusion mixed with indignation.

It was the look of feeling violated.

I recognized it immediately, because I know that look well. I’ve made that face when boys used to snap my bra or pull my ponytail. When people touched my pregnant belly without asking. When people, usually men, feel the unsolicited need to comment on my hair, my chest, my ass, my weight, my size, or the bags under my eyes.

I wanted to run to her, hug her, and tell her no one has the right to touch her sweet curls without permission. To be strong and next time maybe even punch the guy in the stomach (I know, I know, we aren’t supposed to promote violence, but when Mama Bear takes over, all bets are off!). But by the time I got to her, she had moved on. Swallowed the feelings, dismissed the action as minor, convinced herself she was overreacting as we women often do.

Some of you may think I’m making a big deal over nothing, and I’m sure most people are well intended.

But for me, when I see that pained look in her eye, the uncomfortable squirm and the glance at me wondering, why is this happening, mom? I feel angry inside.

Because my 3-year-old daughter is too young to have to already experience what it’s like to be an object; some thing to be observed, judged and poked. People playing with her curls may seem trivial, but to me it’s the first of many instances in my daughter’s life where she will be objectified.

And I’m just not ready for that. The road to womanhood is hard enough with it’s awkward phases, judgment, and insecurity, and that’s just what goes on in our own minds. I want to shelter her from this insensitive and thoughtless culture we live in, for her to remain blissfully aware, for at least a little bit longer.

I want her go grow up feeling unencumbered, proud in her own skin, to embrace her beautiful curls and her body, to feel strong and confident, and not worry about what other people think about her.

And part of that lesson includes showing her that she doesn’t have to accept things the way they are. She can say no or walk away when people touch her or make hurtful or insensitive comments, not tolerate the unwelcome judgment because girls are supposed to be polite. I want her to know that her value and worth come from within, not to feel defined by the opinions of others.

(This post was originally published on Mid-Peninsula Mom’s Blog on October 10, 2017)

Follow Some Thoughts are Better Left Unsaid on WordPress.com